Was going to title this ‘Critters and Varmints’ but I think a varmint is more of a furry creature. Critter is a great word though, it covers just about anything from cute tiny robbers (raccoons) to giant mice (opposums) and big hairy spiders. You will note though that I haven’t taken any pics of spiders. I don’t like things that can attack me before I shoot them. With a camera obviously. It’s a bit over-the-top to blast a spider with a shotgun. Not that I kill them anyway, I always try and throw them outside, but sometimes Dawg gets to them first and eats them. He’s a big critter-eating critter.

He tried to spend the winter indoors last year when I brought the Hibiscus bush back inside. I would have been happy with that except he decided not to hibernate and hop around the living room. Bye Froggy. I hope you survived after I took you back outside (I buried him in the mulch)

Warning! You may never eat tomatoes again after finding this giant critter in your plants 😦 I refuse to pick tomatoes now. I make the other minions in my family do it for me.

I think it’s a grasshopper anyway. It’s cute. Check out the smile for the camera!

Green and purple – he was so nice to pose against the gladioli for me.

Was just a wee toaty one though. It was cute.

Just love the sound of the crickets and the tree frogs in the evening here. Don’t like them so much when they try and come in the house.

At least I think it’s a cockroach. Whatever it was it was dead (hence the funny angle) I’m not too keen on cockroaches (even when they’re dead!)

*Edited – Dung Beetle is the new ID. Cockroaches/dung beetles, they’re all too big, too ugly, too scarey!

These are so hard to photograph. I got lucky here with this one.

Funny story – I don’t mind bugs, but I hate slimy-wormy-sluggy-things. Maggots give me the heebie-geebies. But one time back in Scotland in the kitchen of my first flat I ended up standing on a slug. It squished right between my toes. I can still picture my husband looking at me going “What the heck?!?” as I’m prancing around the living room squealing like a big girls blouse whilst rubbing my foot across the carpet. Kind of like a bull does before he charges. Not a happy memory.

I’m currently trying my hardest to capture a photograph of the Fireflys (or Lightning Bugs as they’re called around here) Every evening they are fabulous when they fly up close to you and they fly pretty slowly too, but so far I haven’t been able to shoot one. Again, with a camera.

Working from home gives you loads of time to procrastinate (Blogging anyone?) but on the whole I’m pretty good at being diligent and working hard. So much so that sometimes hours can have passed by and I haven’t taken a break or moved much from my PC. My biggest distraction is probably this….

Anyway today I decided to take advantage of the 90+ degree and go sit outside for a wee half hour with a cup of tea and my book and put my feet up…..

It’s just a bit of wind and a few clouds I though (I’m a glass half-full type) and decided to brave it out. It was still warm and a bit breezy (or as we would say in Scotland “It’s a guid drying day fur the claes”) but when the rain turned to hail and the wind turned to hurricane level I decided the weather had won and went inside. Ah well, there’s always this….

Tea and biscuits and procrastination anyone?

Last set of uploads from New York (I promise!) even though I have hundreds more. I don’t want to be boring. Plus I have another big trip planned in a couple of weeks…. ssshhhh, it’s a secret!

I would have loved to have been a couple of feet to the left but that would have meant hovering hundreds of feet up in the air off the side of the Empire State Building, and even though I have MANY special powers hovering in mid-air isn’t one of them (unfortunately)!

*edited – left? I mean right of course. I think I have left-right dyslexia. All I ever hear from my family and friends is “NO, your OTHER right!”

Just sitting watching the world go by. Is there anything more fun than people watching? I think not. Mind you when I people-watch I try to avoid eye-contact, but sometimes the inevitable happens. I think I’m a magnet for weirdos and nutters. I have so many stories about being approached by strangers and the strange things that happen to me…. another time for those stories perhaps.

Didn’t get to walk across unfortuantely. One of my friends we met up with in New York actually had a broken leg so we tried to make it as easy as possible for her with the amount of walking we did. Mind you I still managed to average 18,000 steps a day! She didn’t do that many steps before I get accused of cruelty to the broken-legged. She taxied a lot of places where I would walk with my other friends. One photograph I would have loved to have taken was of this bridge at night with the skyscrapers in the background but that photo has been done to death anyway, by much better photographers than me.

Not a black and white but I really love old advertising, especially on the side of buildings. I actually have a plan in my head to do a graphic design of all the New York street signs (yep, I took tons of photographs of them too!) and make them into a sort of collage. That project will take me a wee while to complete but until then, goodbye from Noo Yoik!

Some more street-life photography with accompaniment this time. 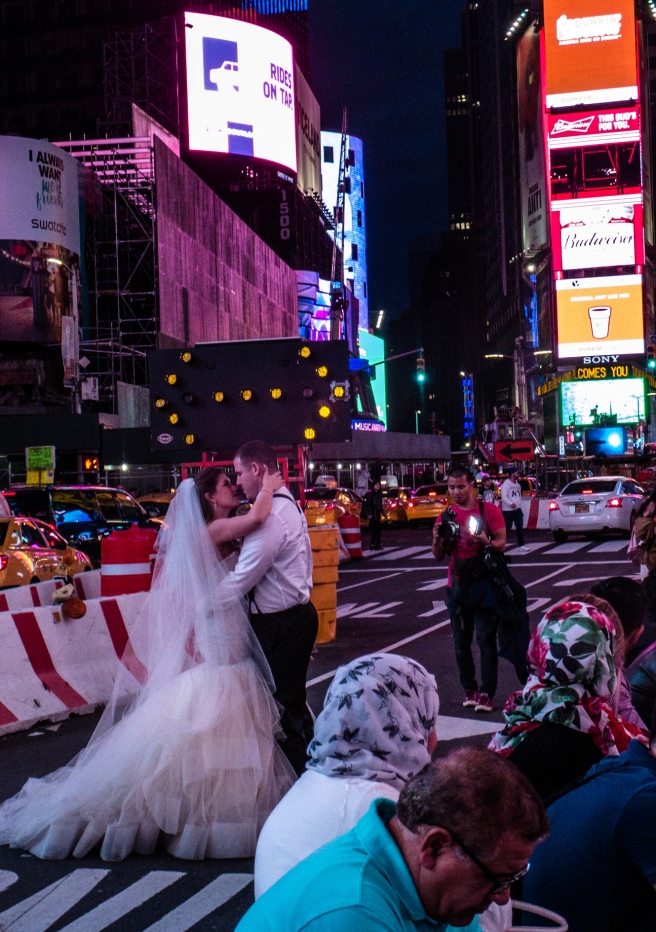 New York People – the colourful and not so colourful characters. Give me a pavement cafe and sit me down to peoplewatch and I’m happy.

Technical note – only took the one lens with me, Sigma 18-300, as I didn’t want to be faffing about with changing lenses all the time and I was very pleasantly surprised at how well it shot portraits. The majority of my ‘street-life’ shots were taken from a moving bus too so I’m pleased at how it performed.